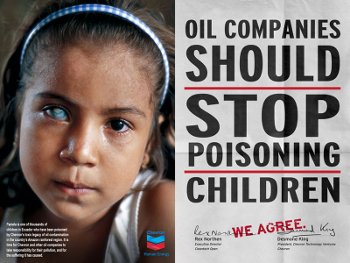 VOTE FOR YOUR FAVORITE PARODY AD
AND ENTER YOUR OWN IN THE CONTEST!

Amazon Watch exposed Chevron's attempt to "greenwash" its image, and we are putting the spotlight back on the company's practices and un-met responsibilities in the Ecuadorian Amazon.

Before Chevron's "We Agree" campaign was even announced, we worked with RAN to support the Yes Men tricksters in launching a hoax version of Chevron's campaign – with parody ads and press releases that had the company "speaking honestly" about issues its real campaign is designed to co-opt and conceal.

Here is a sample of some of the media coverage:

With the launch of their "We Agree" ad campaign, Chevron gave us a chance to use the company's huge profits and major investment in deceptive PR tactics to put the spotlight back on the ongoing human and environmental tragedy in Ecuador's Amazon rainforest.

Thanks to the ongoing effort from The Yes Men and a hilarious spoof video from Funny or Die (warning: contains some profanity) we have continued efforts to expose Chevron's greenwashing and spread the word on-line. The video is featured on a new website we've launched along with Rainforest Action Network (RAN) and corporate crime-fighting pranksters The Yes Men.

www.ChevronThinksWereStupid.org provides tools so that anyone can join in the fun, designing and uploading your own parodies of Chevron's ads. Our new website and Funny or Die's hilarious spoof are only the latest elements in a counter-campaign that has completely overshadowed Chevron's "We Agree" campaign, which the company launched just last week.