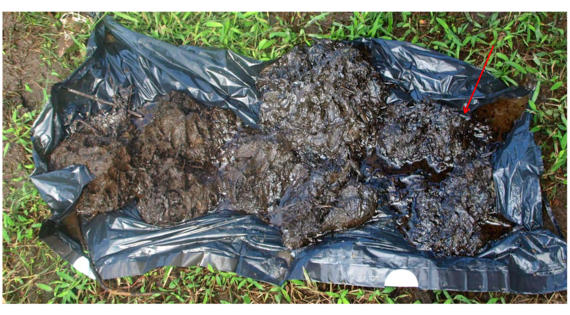 - New York Times columnist, October 2005 "A (Chevron) spokesman told me yesterday that the billions of gallons of waste that was dumped 'wasn't necessarily toxic .... We've done inspections. We've done a deep scientific analysis, and that analysis has shown no harmful impacts from the operations. There just aren't any.'"

- Louis Berger Group Scientific Report, November 2014: A New Jersey-based environmental firm, the Louis Berger Group, has found illegal levels and harmful contamination at well sites in Ecuador where only Texaco explored for oil - no other oil company. It found lethal toxins that have migrated away from huge oil pits in streams people use for cooking, bathing and washing clothes. It found hidden, undisclosed pits. And, it found that pits Texaco & Chevron swore under oath had been cleaned contain large amounts of oil oozing from them near villagers' homes. See LBG report.

Below are Louis Berger Group descriptions and photographs of present-day contamination at Texaco well sites in the Ecuador rainforest, almost 22 years after a group of Ecuadorians filed a lawsuit to hold the oil company accountable for one of the world's largest environmental disasters. An Ecuador court and eight appellate judges have awarded the Ecuadorians $9.5 billion in damages but Chevron refuses to pay. (Chevron bought Texaco and all of its contamination in 2001.)

Not only does Chevon refuse to pay, its top executives at the urging of their lawyer Randy Mastro of Gibson Dunn have vilified and sued practically everyone associated with the Ecuadorian indigenous groups and villagers.

Chevron General Counsel Hewe Pate delights in announcing how our contamination experts and litigation funders (who've been threatened by Chevron with bankruptcy and never-ending litigation) have disavowed the Ecuadorians and their attorneys.

But what about this new group of environmental engineers from Morristown, New Jersey, who have conducted a very recent, scientific analysis of contamination at 60 mostly Texaco-only well sites that Chevron says it's not responsible for and has not harmed anyone ever.

(I say, Texaco-only, because Chevron wants to blame the contamination on Petroecuador, the country's nationalized oil company, which is why LBG concentrated its work at sites opened, drilled and closed by Texaco only.)

The Louis Berger Group is an international architectural and engineering firm that's been around for 60 years and is one of the top 20 such firms in the world.

Ecuador hired LBG to backup existing evidence of contamination for a private arbitration claim, filed by Chevron with the hope that a panel of corporate lawyers will force the Ecuadorian government, i.e., its taxpayers, to pay the judgment. (Hopelessly conflicted, these panels have been severely criticized. Read more here.)

This information has been made available by the Government of Ecuador on this web site.

Field staff reported that one simply had to press one's foot into the soil in certain wetland areas and oil seeped from the ground.... 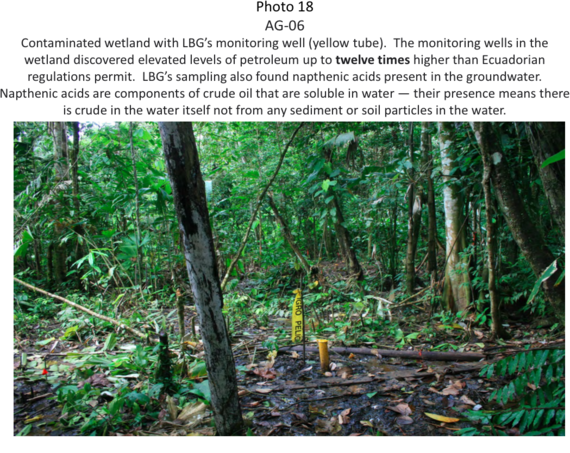 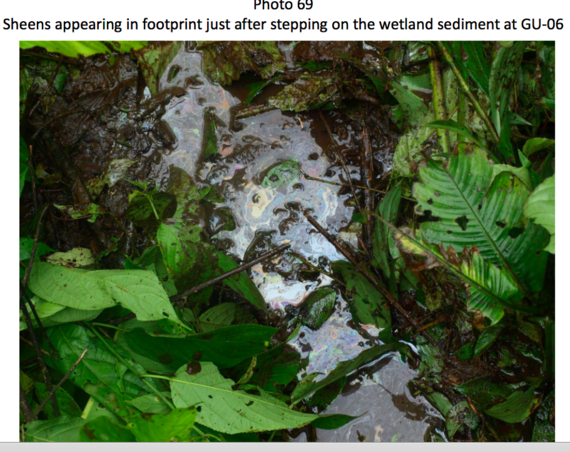 We observed residents ... in daily contact with contaminated environmental media.... 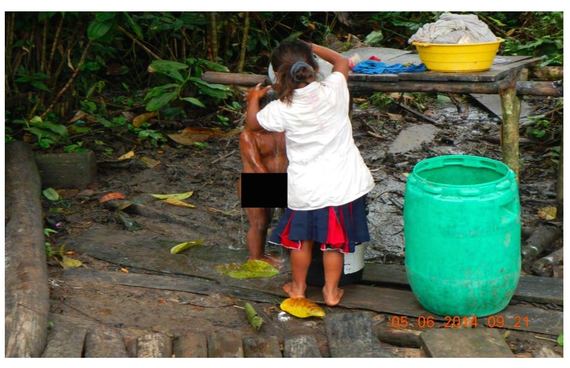 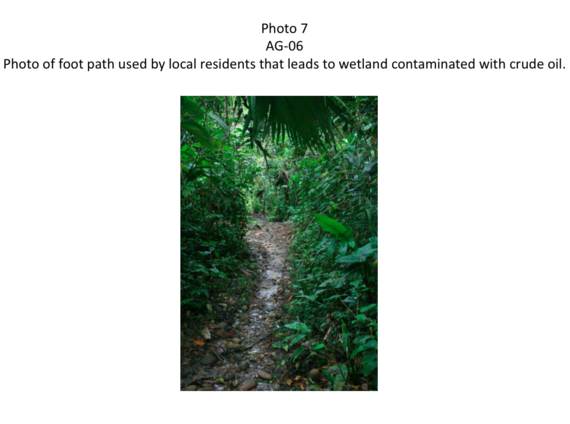 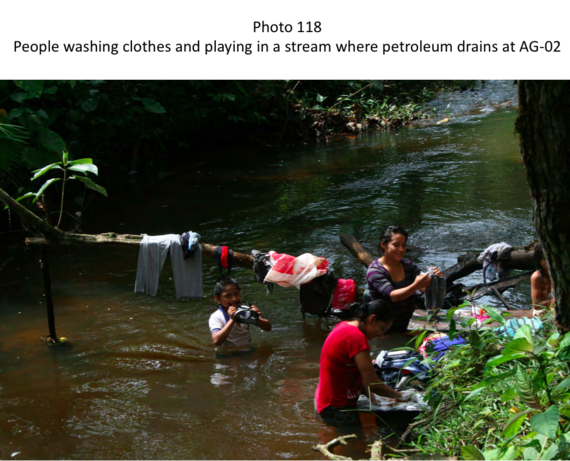 The more one investigates (Chevron/Texaco sites), the more crude oil contamination one finds.... 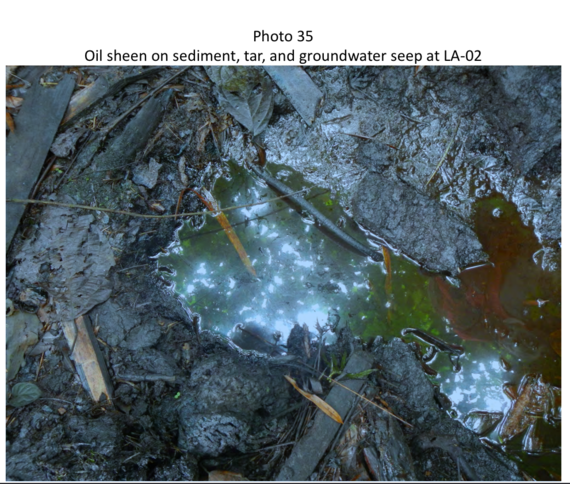 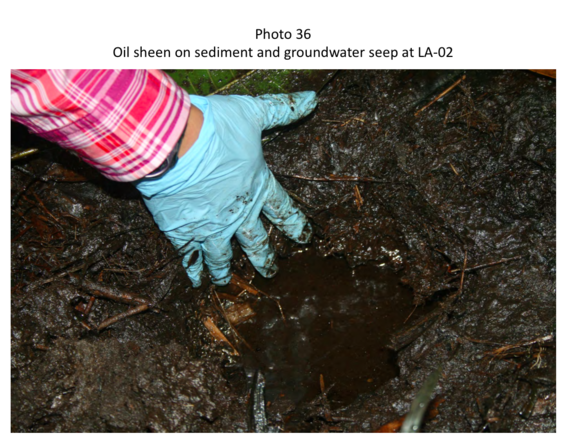 It is our opinion that information developed (during the Ecuador trial), while substantial, just scratches the surface of identifying the environmental condition of the (former Chevron Texaco sites).... 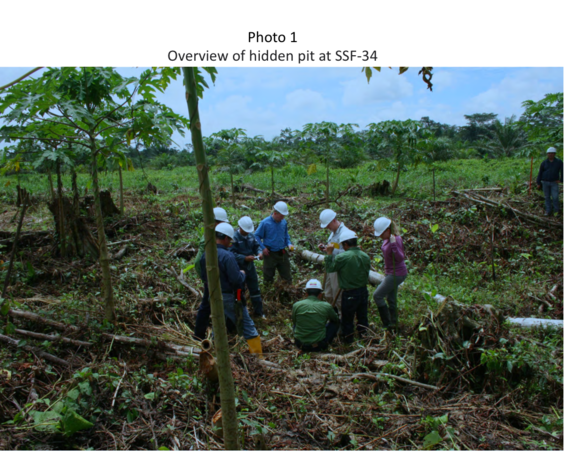 LBG Found Hidden Pits. Without A Master List, No One Knows How Many Others Exist 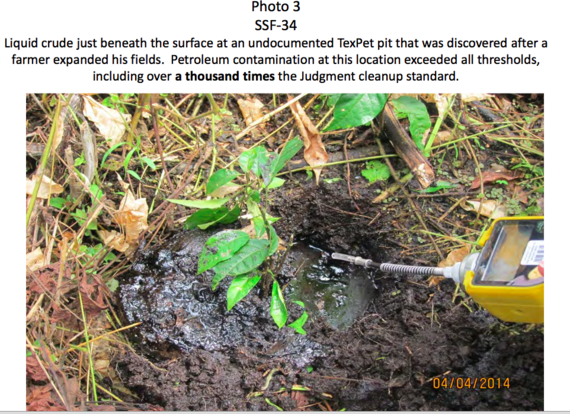 Chevron Says It Has No Master List Of Texaco Pits

These findings reinforce our opinion that the (Ecuador) Judgment's assessment of damages was reasonable. 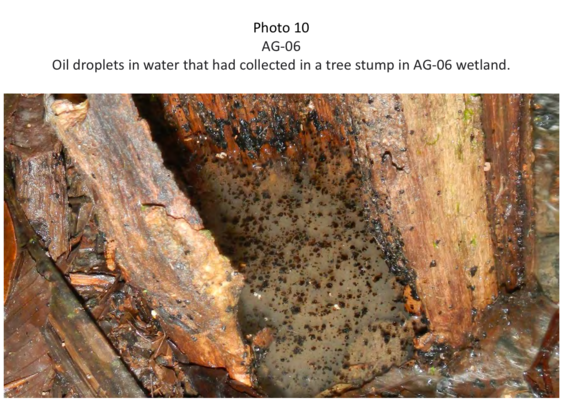 (Contamination) is not limited to the immediate vicinity of (Texaco-only) facilities .... (it) has migrated to locations where residents, their domestic animals, agricultural activities, or groundwater or surface water resources are present ... support(ing) our opinion that contamination is widespread.... 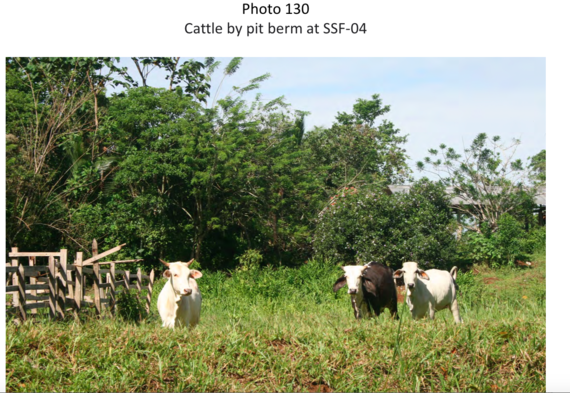 As (sole operator), Texpet's operations caused past and persistent environmental injury from exposure to toxic and hazardous chemicals and consequent risk to human health and ecological receptors; (Texpet was an subsidiary of Texaco.) 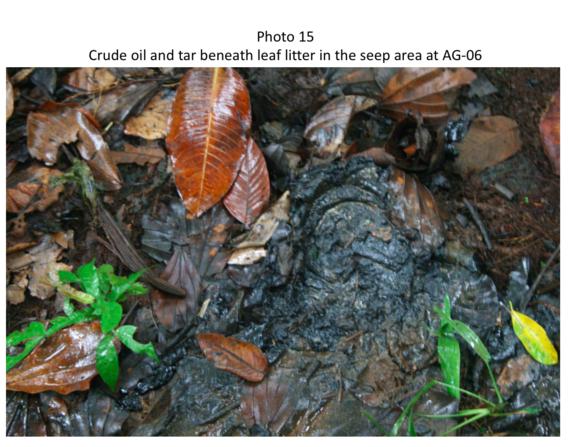 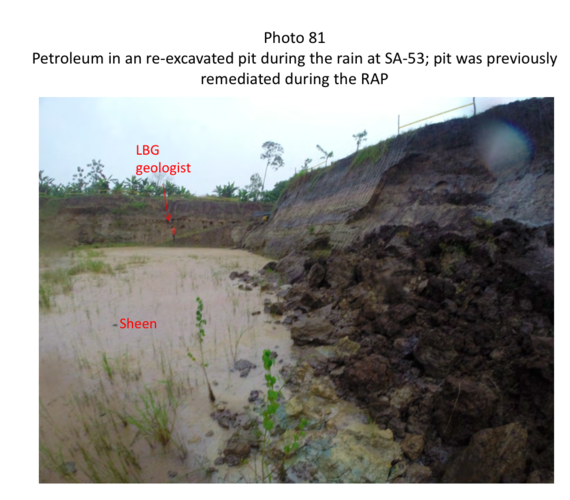 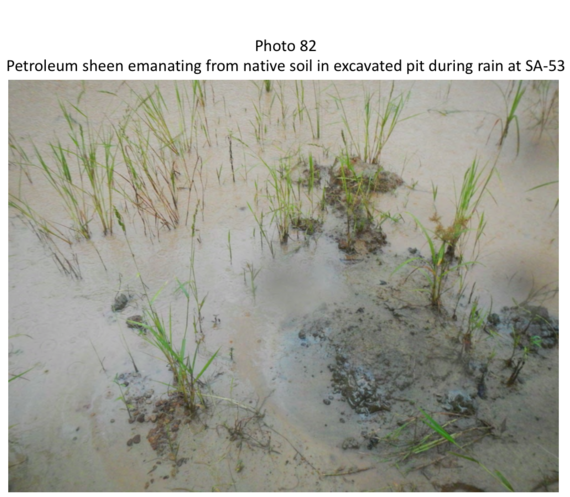 During the (the Ecuador trial) Chevron's (contamination testing was) not representative and thus did not adequately characterize the extent of contamination; notwithstanding this limitation ... Chevron's (and the Ecuadorians') sampling and testing evidenced significant contamination by toxic compounds. 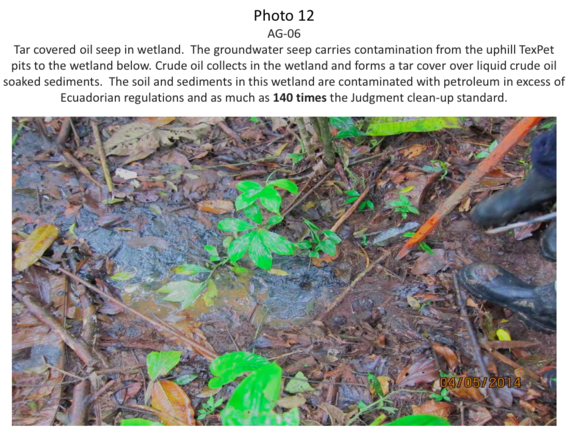 ...field data show(s) that, where groundwater was found to exist as a resource, it is contaminated; (Chevron's) blanket assumption that impermeable clay occurs everywhere, rendering pit lining unnecessary, is false. 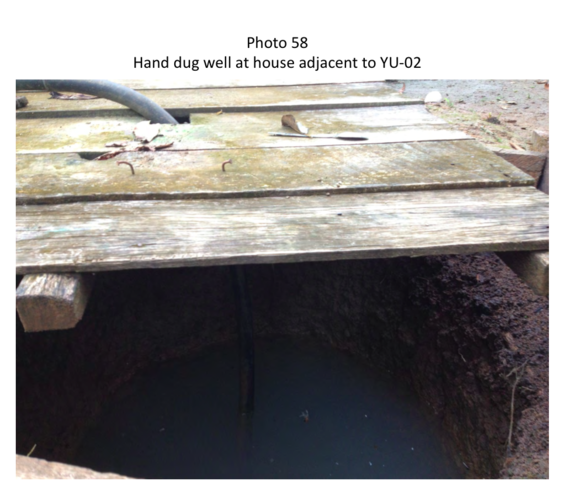 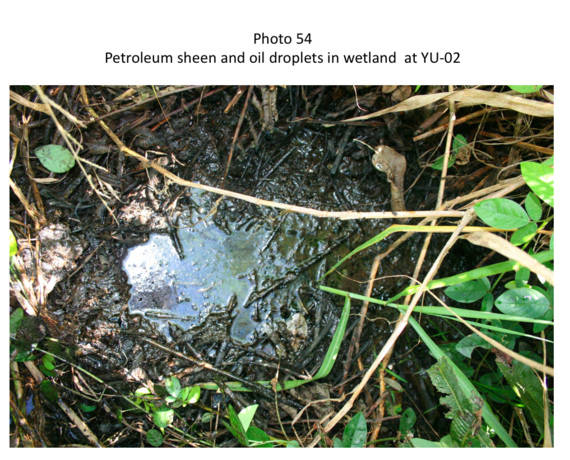 ...sediment contamination in streams that flow adjacent to (Texaco-only sites) occurs at significant distances ... and at locations where people and animals access the streams.... 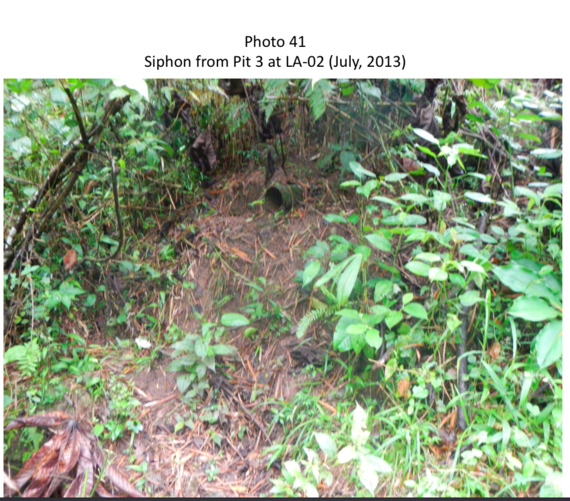 ...contamination caused by TexPet's operations is still present and mobile in the environment.... Along the streams adjacent to the sites, ... crude oil bubbl(es) upward when sediment was disturbed. We also observed areas where people use these same impacted water resources. 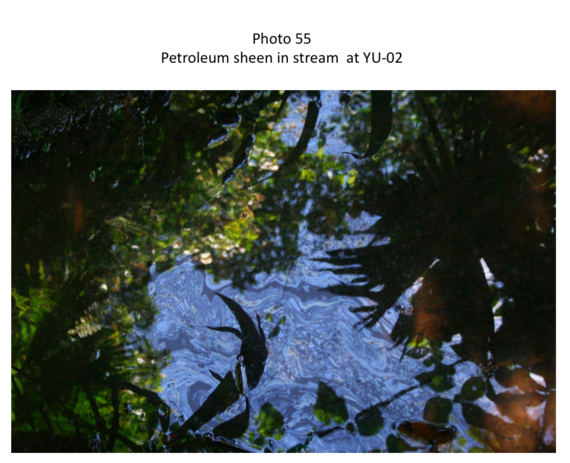 .... data also indicate that the vast bulk of the oil contamination lies in the soils beyond the pits, not in the pits themselves. 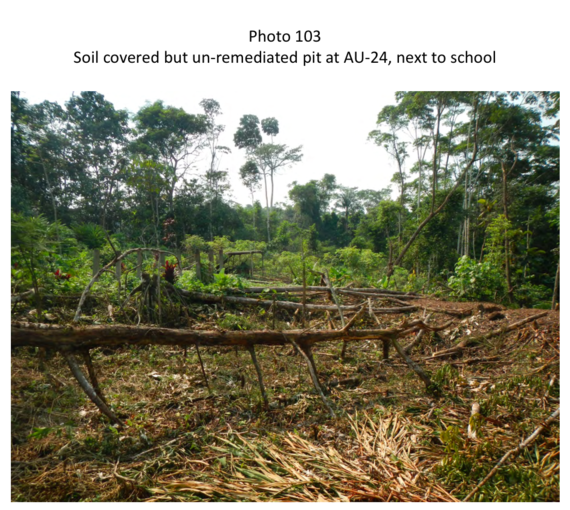 Our analyses estimate the mass of residual oil contamination remaining in the soils of the Oriente is large by any calculation basis. 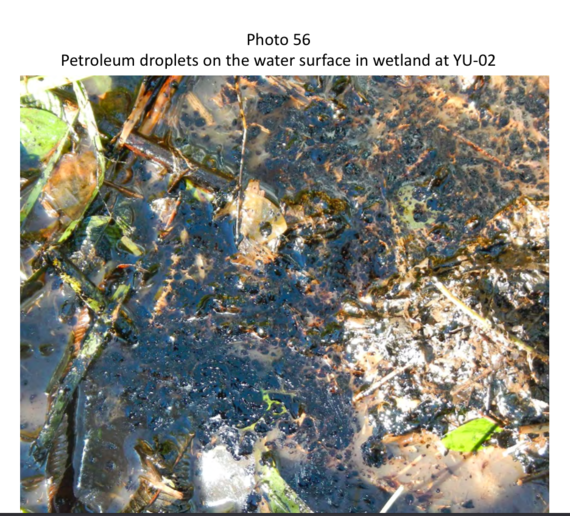 Additional photos of the devastation that continues to threaten the lives and health of the Ecuadorian people appear here.

On April 20th, the Second Circuit Court of Appeals will hear oral arguments in the Ecuadorians' appeal of Chevron's fraud charges. In 2011, Second Circuit Judges Rosemary S. Pooler, Reena Raggi, and Gerard E. Lynch ruled against Chevron when the company tried to block enforcement of the Ecuador judgment anywhere in the world.