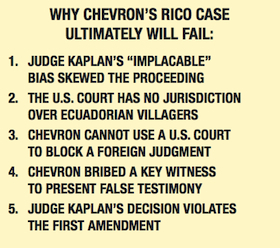 New York, NY – A new report concludes Chevron made a "mockery of justice" and bribed a witness during its retaliatory RICO case in New York, leading to a likely reversal by U.S. appellate courts and a growing risk for the oil giant in jurisdictions where the villagers are trying to seize assets to pay for a clean-up of their ancestral lands.

"This new report makes clear that Chevron presented false testimony in the trial and as a result will face significant risk in foreign courts that will look at the many obvious deficiencies in Judge Kaplan's RICO decision," said Christopher Gowen, a lawyer and professor of ethics at the Washington College of Law at American University who helped to represent the RICO defendants.

After an eight-year trial, an Ecuador court in 2011 found Chevron liable for systematically dumping billions of gallons of toxic waste into the Amazon rainforest and imposed $9.5 billion in actual damages. Two appellate courts – including Ecuador's highest court, the National Court of Justice – have unanimously affirmed the judgment. Because Chevron refuses to pay, the villagers have filed seizure actions targeting company assets in Canada, Brazil, and Argentina.

To retaliate against the villagers and their lawyers for pressing their claims, Chevron in 2011 – at the invitation of Judge Lewis A. Kaplan – sued them in New York under a civil racketeering law alleging that the entire case was a "sham." The company dropped damages claims on the eve of trial to avoid a jury, intentionally leaving the decision in the hands of a judge who had repeatedly made disparaging comments about the villagers, Ecuador's judiciary, and New York attorney Steven R. Donziger.

The main conclusions of the report, titled "Chevron's Mockery of Justice: How Judge Kaplan's RICO Decision Suffers from Five Fatal Flaws," are as follows:

The report concludes that the RICO decision likely will backfire against Chevron in foreign jurisdictions. "Unlike what happened in New York, we believe foreign judges will not be biased in favor of Chevron nor will they succumb to Chevron's political pressure campaign," the report concluded.

In Canada alone, Chevron has an estimated $15 billion in assets, or more than enough to cover the entire judgment, said Juan Pablo Saenz, an Ecuadorian lawyer who represents dozens of rainforest indigenous and farmer communities affected by Chevron's contamination.

"This report strongly suggests that Chevron's RICO proceeding will prove to be an embarrassment fto the United States in Latin America and around the world," predicted Saenz. "It is clear from our analysis that Judge Kaplan let a wealthy oil company use his court to conduct a show trial to distract attention from its significant liabilities in Ecuador as determined by that country's laws and courts."

Donziger, who has advised the affected rainforest communities in Ecuador for two decades, has accused Chevron of using the RICO case as a smokescreen to hide its criminal and fraudulent activity in Ecuador and to distract attention from its growing liability. Donziger also criticized Judge Kaplan's "implacable hostility" toward him and his clients and said repeatedly that the defendants could not get a fair trial as long as Kaplan was presiding.

As part of its scorched-earth retaliation campaign, Chevron has sued five different lawyers who have represented the Ecuadorian communities, three funders of the lawsuit, the scientific consultancy that advised the legal team, and all 47 rainforest villagers named on the lawsuit. The company has also named numerous other law firms and individuals as "non-party co-conspirators" in an attempt to intimidate people into abandoning the case, said Saenz.

"Chevron's entire strategy is to win by might what it knows it cannot win on merit," said Saenz. "It is trying to incapacitate our legal team so the villagers feel so vulnerable they will settle the case for a pittance. This is the ultimate SLAPP lawsuit designed to intimidate."

For background on the overwhelming evidence against Chevron relied on by the Ecuador court that Judge Kaplan refused to consider, see this document; this video; and this 60 Minutes segment on the case.

For background on Chevron's long-term strategy to demonize the Ecuadorian communities, their lawyers, and the entire country of Ecuador, see this memo from the company's San Francisco-based public relations consultant, Sam Singer. Singer is well-known for secretly paying bloggers and journalists to parrot Chevron's talking points without disclosing Chevron's role.

For a letter signed by 43 U.S. civil advocacy groups criticizing Chevron for its improper use of the RICO statute to attack its critics, see here.

For further background on Judge Kaplan's long history of bias in the Ecuador case, see these legal petitions (here and here) filed by the law firm Patton Boggs to have him recused from the case.