To commemorate a delegation of Ecuadorians visiting the U.S. to demand justice from Chevron, the communities of the Ecuadorian Amazon issued an Open Letter to the People of the United States. In it they write, "We write this letter to you on behalf of the thousands of affected peoples in Ecuador, so that you can do something, now, and demand that Chevron clean up the poison that it left in our Amazon, and restore the image of the United States and its citizens." 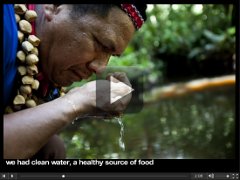 Watch this powerful video version
of the Open Letter

To the citizens of the United States,

We are the mothers of families. We are fathers who work very hard every day. We are grandparents who hold on to many memories. We have blood like all human beings. We feel pain. We cry. We laugh. We suffer.

We do not know you. We imagine that you are the same as we are: with hearts that beat, with eyes that appreciate the beauty of the world around us, with feet that walk on the same planet as ours. But even though we do not know you, we would like to share with you a story that you all should know.

It occurred in a place called the Ecuadorian Amazon almost 50 years ago. Thousands of people live here now, and many of us have lived here for thousands of years. We had clean water, a healthy source of food, enough land to live on, medicinal plants to cure our ailments; in other words, we lived with dignity and in harmony with nature.

But in that moment an oil company arrived whose name we remember well: Texaco. We were not familiar with oil and we barely knew of white men either. They arrived in our territory and told us they worked for Texaco. They told us that oil was something good, something special, and that it would bring progress for the future. 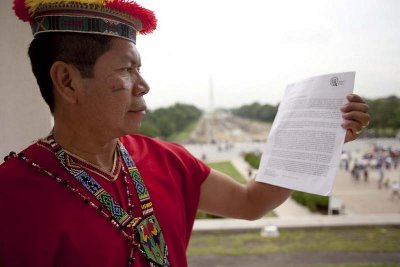 Humberto Piaguaje, indigenous leader from the Secoya tribe in the Ecuadorian Amazon, brings the 'Open Letter to the People of the United States' to Washington, DC (shown here during a visit to the Lincoln Memorial)

We do not know you. We only know the company Texaco, now called Chevron, and we know that it is from your country. We know its lies, its disrespect, its greed. We know how it polluted our land, water, and air with oil. We know how it destroyed our forest and the lives of human beings.

We are a people of great courage and humility who have been in a struggle for many years to demand justice and that the company take responsibility for all the harm they have caused. Just last February, after 17 years, an Ecuadorian court found Chevron guilty for the harm it caused our people and our lands. But the company lacks a conscience. It has said that it will never respect the court’s decision, that it will never take responsibility for the damage done, and that it will keep fighting until Hell freezes over. What’s more, Chevron is now accusing us of being the criminals. Somehow now they are the victims and we are the criminals. Does that seem like justice?

We have heard that the United States is a country of freedom and democracy; a country where the people have a heart; a country where laws are respected. For this reason, we want to reach your hearts, so that you know the truth – our truth, not just the "truth" according to Chevron. Although Chevron has right to express its opinion, it doesn’t have the right to lie and continue killing more people in Ecuador. Chevron has poisoned us. It has also poisoned the image of the United States and of its citizens. We write this letter to you on behalf of the thousands of affected peoples in Ecuador, so that you can do something, now, and demand that Chevron clean up the poison that it left in our Amazon, and restore the image of the United States and its citizens.

Defend the truth, and defend justice.

Thank you for listening to us.