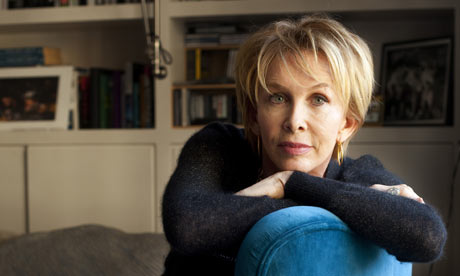 Trudie Styler makes an unlikely environmental activist. Today, she is dressed all in black, her legs tapering into a pair of six-inch stilettos decorated with a large bow on each shoe. They look impractical for tramping through the Amazonian undergrowth.

But it would be a mistake to dismiss her as just another celebrity do-gooder. In 1989, long before eco became chic, Styler set up the Rainforest Foundation with her husband, the musician Sting, to protect communities threatened by deforestation. "I don't think I'm a novice," she says, sitting in the London offices of her film production company, a four-floor 17th-century townhouse just down the road from St James's Palace. "Not after 20 years of fighting for the rights of indigenous people."

Since its inception, the foundation has helped protect more than 100,000 sq km of rainforest for local tribes. Styler, 54, is the lobbying and fundraising powerhouse, with an impressive network of contacts that runs the gamut of modern celebrity from the Dalai Lama to Madonna (whom she introduced to Guy Ritchie over dinner). She admits that she is "shameless" when it comes to calling in a favour. "We get invited to lots of things, I meet lots of famous people and they're well connected and if I think that they can help in one of my causes, I'll call them."

Her latest project is Crude, a critically acclaimed documentary film that tells the story of one of the most controversial environmental lawsuits in recent history. For the past 15 years, 30,000 residents of the Ecuadorean Amazon have been fighting a legal battle against the Chevron oil company. The plaintiffs allege that, over the course of operations dating back to 1964, Texaco (acquired by Chevron in a 2001 merger) dumped more than 18 billion gallons of toxic waste directly into the streams and rivers on which people rely for drinking, cooking, bathing and fishing.

The dumping alone was 30 times more oil than was spilled in the Exxon Valdez disaster, with one crucial difference: while Exxon Valdez was an accident, the plaintiffs claim that Texaco's dumping was a deliberate strategy to reduce costs. By handling its toxic waste in Ecuador in ways that were illegal in its home country, Texaco saved an estimated $3 per barrel of oil produced.

"Quite frankly," says Styler, picking up a small bottle of mineral water from the glass coffee table in front of her, "this clear beautiful water that is our life substance doesn't exist in 1,700 square miles of Ecuador's rainforest."

It is a troubled region - this month, Prince Charles visited Ecuador to highlight the damage done by climate change. The impact of the oil-drilling has been similarly devastating. Cancer rates have rocketed, blighting a region with little or no access to adequate medical care. There are high levels of leukaemia, miscarriage and birth defects. Five indigenous groups have lost 95 per cent of their ancestral land. In 2008, a court-appointed technical expert estimated that the contamination had caused 1,041 excess deaths from cancer.

When the film-makers contacted Styler last year, she immediately boarded a plane to Quito to see the situation first-hand. "What you see in this area is mile upon mile of oil pipes and very broken-down buildings. The light has gone out of the people's eyes. What I saw on the faces of the mothers is that they're terrified that the water they give their children, day in, day out, is going to poison them and they've got good reason. There's a lot of kids who've got leukaemia, lot of kids with cancer. It's nothing for mothers to bring in their eight week babies just covered from head to foot in really livid rashes from the contaminants in the water ... These are people who, for 35 years, have watched so many of their people die that they're broken. Their day-to-day living is disastrous. They've seen a lot of death.

"I visited a mother and daughter. The mum's 38, Maria, she's got uterine cancer. Her daughter, Sylvia is 18. Sylvia's got liver cancer. Just ... " She trails off. "The oil company won't take any responsibility for that."

The problems have been further exacerbated by the existence of 917 unlined waste pits, filled with toxic sludge, that allow millions of cubic metres of poisonous gas to escape into the atmosphere. Although Texaco reached a $40m settlement agreement with the Ecuadorean government in 1995, in which the oil company agreed to clean up the well sites, the plaintiffs allege that the process was partial and inadequate.

Chevron claims that it is PetroEcuador, the state-owned oil company which took over Texaco's operatdions in 1990, that is to blame for the current pollution.

The film, directed by Joe Berlinger, an award-winning documentary-maker, demonstrates just what an effective operator Styler is. This is unquestionably a woman who Gets Things Done. The film follows her as, within weeks of her first visit to Ecuador, she oversees the installation of a water filtration system that gives locals their first access to clean drinking water in 35 years. The $150,000 cost of the system was covered by the Rainforest Foundation, and Unicef is now lobbying the Ecuadorean government to take over the project permanently. Styler's bulging contacts book came in useful too - she got Pablo Fajardo, the 34-year-old lawyer for the plaintiffs, a profile in Vanity Fair.

She is quite straightforward about the benefits of fame by association - "I'm lucky enough to have some celebrity light around me. I can go on a platform and say what I think to represent these voices that can't be heard" - and the film makes clear that, whatever one thinks about the vacuity of celebrity culture, Styler's involvement in the case guaranteed a heightened media interest and tangible results. "We've only just really woken up at the 11th hour to realise that, oh, our planet is warming up," she says. "There'll be years of teething problems searching for alternatives to oil but they have to be embraced with passion because our oil is finite and we're running out. Fact. So, you know, I would call upon our governments to really make the environment a priority."

But it is difficult to reconcile these good intentions with Styler's high consumption lifestyle. She and Sting, who have been married for 17 years, have four children - Mickey, 23, Jake, 22, Coco, 17, and Giacomo, 12 - and the family split their time between homes in New York, Los Angeles and London, as well as running an 800-acre organic estate in Wiltshire and a Tuscan farm that produces olive oil. Styler takes a lot of aeroplanes. Does she acknowledge the inherent contradiction between her words and her actions?

"It's a good question and I do. I don't know how to answer it really without feeling I'm defending myself and I've got nothing to defend. My husband is a musician, he brings music to many people in the world, so we travel.

"I get a lot of mud slung at me and yes, I do take planes but I feel that's my life. My life is to travel and my life is also to speak out about the horrors of an environment that is being abused at the hands of a very irresponsible oil company. I can't think of a cleverer answer than that."

Does she offset her carbon? "I don't believe in carbon offsetting. Planting 60 trees so you don't have to say your Hail Marys that night? It's a crock. We should be looking at the bigger picture. It's all very well going around driving our Priuses but we have to look to our governments to make us less reliant on oil."

There is something rather refreshing about Styler's good-humoured honesty. She is not remotely preachy and nor does she claim to have all the answers; she simply calls it as she sees it. She attributes this capacity for plain speaking to her modest upbringing on a Birmingham council estate: her mother, Pauline, was a school dinner lady and her father, Harry, packed lampshades in a factory. After Styler was knocked over by a Co-op bread van at the age of two, leaving her with facial scars, Pauline took the Co-op to court and won £2,000 compensation.

"My mum was very vocal about justice and what she thought was the right thing to do," Styler says. "She was a woman to be reckoned with. She was a very big lady physically and she couldn't be put down. She said to the judge 'My daughter might need her face to be in front of the cameras one day' and I don't know where she would have got that from."

But her mother turned out to be right: Styler went on to become an actress, training at Bristol Old Vic before joining the RSC and enjoying a brief stint on the popular 1970s television series Poldark. She founded Xingu Films in the mid-1990s and served as executive producer on Guy Ritchie's breakthrough gangster movie, Lock, Stock and Two Smoking Barrels. As well as the charitable and film work, Styler also produces a range of organic jams and chutneys from the family's Lake House country estate. Does she think that consumers will spend less on expensive organic food in the current economic crisis?

"I think organics will get hit a bit, particularly this year where we seem to be gripped by fear ... We say organic food is not cost-effective because we haven't created a mode for it to be cost-effective. For years there was an incentive for setting aside. Why didn't they give money two decades ago instead of to set-aside, to conversion? We would have much of England now as organic soil and we'd be doing a whole lot better.

"But that hasn't been done, largely because I don't think we had in Tony Blair a man who really gave a shit about the environment."

She likes David Cameron's environmental policies - "I really admire him hugely" - so will she be voting Conservative at the next election? Styler guffaws. "My mum said it wasn't polite to talk about politics or religion with people you don't know very well."

It is a diplomatic rebuff. Although Styler does not hesitate to speak out for the causes she believes in, she knows when to keep quiet too.