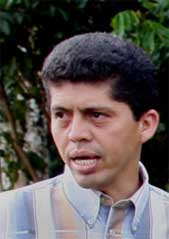 San Francisco - Pablo Fajardo, the lead lawyer for the 30,000 plaintiffs in the landmark environmental lawsuit against Chevron (formerly Texaco) in Ecuador has won the CNN Hero award, in the Fighting for Justice category.

Fajardo was chosen from more than 7,000 nominations from 93 countries submitted by viewers to CNN over five months. The international cable news station established the Fighting for Justice category to recognize leaders "advancing the cause of civil or equal rights".

The honor again highlights the class-action lawsuit, brought by 30,000 impoverished rainforest dwellers, against one of the world's largest corporations and Chevron's fierce rearguard battle against the plaintiffs. The David-and-Goliath legal battle, expected to reach judgment in 2008, has the potential to set a world record for damages paid out by an oil company.

In total, 18 finalists were reviewed by CNN's "blue ribbon panel" of 15 world leaders who chose the winners in each of six categories. The winners were unveiled last night in a live global telecast, &quot;CNN Heroes: An All-Star Tribute&quot;, hosted by Anderson Cooper and Christiane Amanpour, on CNN/US, CNN International and CNN en Español.

Fajardo insiste­d the award was recognition for all the plaintiffs and their supporters. "Many of those that I represent have lived for thousands of years in peace with nature and yet in only three decades, their traditional lifestyle has been almost destroyed by pollution," he said.

"Our work in Ecuador is an example of the good things that can happen when thousands of people, most without money or power, can come together in a common effort to better themselves and the planet."

Fajardo, 35, has been spearheading the legal team for the plaintiffs for several years, as they demand an environmental remediation from Chevron estimated to cost $6 billion. During nearly three decades of drilling in a vast, inhabited area of the Ecuadorian Amazon, Texaco dumped more than 18 billion gallons of toxic wastewater. Now, impoverished local communities are suffering a wave of cancers, stillbirths, birth defects and other severe health problems.

Born into extreme poverty, Fajardo only became a lawyer in 2004, after first working as a manual laborer, including in the oil fields of his hometown of Lago Agrio, while completing a correspondence law degree.

During that time, Fajardo became an increasingly outspoken community leader, opposed to the devastation wrought by Texaco on his people and their once pristine rainforest lands. Now, in his first trial, Fajardo, who travels around by bicycle, finds himself confronting a team of highly-paid, extremely experienced lawyers contracted by Chevron.

Down the years, Fajardo appears to have paid a high price for his pursuit of justice. One of the friends who helped to pay for him to go through law school was murdered as was one of Fajardo's brothers, a Christian minister. Neither murder has been resolved by the Ecuadorian authorities.

"I can't think of a more worthy recipient of this award," said Amazon Watch Executive Director Atossa Soltani. "Pablo is a true hero, committed with every bone in his body to achieving justice for his people and establishing a legal precedent that human rights must be respected by the extractive industries wherever they operate."