Both ChevronTexaco and lawsuit plaintiffs are finding evidence of contamination during judicial site inspections: the question is, does it pose human health or environmental risks? (part two of a multi-part article.)

SocialFunds.com -- The delegation of ChevronTexaco (ticker: CVX) shareholders, after spending the morning of March 9, 2005 observing the judicial inspection of pits where waste from oil well 67 was dumped, stopped to give a lift to the kids bathing beneath the oil pipeline in the Rio Shushufindi. Little did they realize they would be observing yet another waste pit, this time without the judge, his technical team, and the plaintiffs' and company's lawyers and technical experts.

Directly behind the house where some of the kids live sits an open waste pit measuring some 87 by 37 meters. 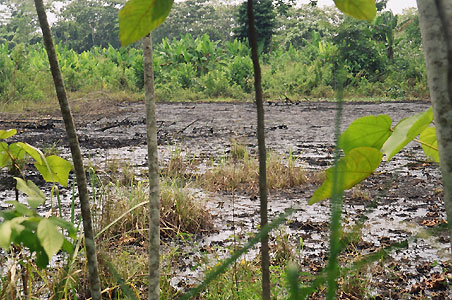 Waste Pit Behind the Home of Marcos Jimenez in Shushufindi, Ecuador
Photo by Leslie Lowe

"When we first saw it, it looked like an asphalt parking lot, but when we threw a stone, it went 'plop' in the liquid," Leslie Lowe told SocialFunds.com. Ms. Lowe is a lawyer and the energy and environment program director for Interfaith Center on Corporate Responsibility (ICCR), a New York-based consortium of 275 faith-based institutional investors with $110 billion in assets.

When Marcos Jimenez purchased the 9 hectares of land in 1981 for about $4,000, he was not told about the pit where waste from oil well number 61 was disposed. A teaching job brought Mr. Jimenez here from southern Ecuador.

"The odors come into the house and my son gets sick: running nose, difficulty breathing, skin rashes," Mr. Jimenez told the delegation. Such conditions are now common to inhabitants throughout the region, who attribute the problems to the pervasiveness of petroleum in their environment.

Is there a causal link between the environmental legacy of TexPet's oil operations and community health problems?

ChevronTexaco says no. The company contends that there is no scientific evidence proving such a link. Russ Yarrow, ChevronTexaco's manager of external relations for policy, government and public affairs, points to the six site inspection reports the company has filed with the Ecuadorian court thus far.

"The data show that there has been no environmental damage from petroleum products at any of those sites, that the remediation was conducted effectively, and there has been no evidence of human health harmful impacts from operations there at the time," Mr. Yarrow told SocialFunds.com. "One of the most significant ingredients of petroleum that has a link to cancer is benzene, and the inspections have turned up no traces of benzene at the sites."

It is difficult to independently confirm the validity of this statement based on information posted on ChevronTexaco's website devoted to the case. Take, for example, information on the well site known as Sacha-53 (SA-53). The Judicial Inspection Reference Guide dated September 1, 2004 includes lab reports dated August and September 1996 and January 2003, before the case began. Benzene is not listed amongst the chemicals tested for. The report does not include lab results from the 2004 inspection overseen by the judge.

The Report of Expert Mr. Ernesto Baca, P.E. Judicial Inspection of Well Site Sacha-53 similarly does not include lab results, but does include this expert's opinions.

"It was also determined that the petroleum that was found in this area [just west of Pit 1] does not pose a risk to human health, since the surface soil samples do not have concentrations of the most toxic petroleum components (Polycyclic aromatic hydrocarbons (PAHs) or benzene, toluene, ethylbenzene, and xylenes (BTEX)) above international evaluation limits," Mr. Baca states.

He frames the findings not in absolute terms ("no benzene"), but rather within a specific context ("do not have concentrations of most toxic petroleum components . . . above international evaluation limits.")

Each side compares the data to different standards.

The plaintiffs cite existing Ecuadorian environmental law, while also referencing environmental regulations in the US, ChevronTexaco's home. According to Decree 3516 of the Unified Legislative Text of the Ministry of the Environment, the Ecuadorian law currently in effect, the maximum allowable amount of Total Petroleum Hydrocarbons (TPH) is 1000 parts per million (PPM). (TPH is an aggregate measure of numerous different chemicals in oil, including benzene and other carcinogens.) US Environmental Protection Agency (EPA) and state regulations are even more stringent, at 50 to 100 ppm.

"With regard to SA-53, we analyzed every single one of their samples as reflected in their lab reports they submitted to the court for this site," Mr. Donziger told SocialFunds.com. "For TPHs, we found 22 samples that they took of TPHs that were over Ecuadorian standards at this one site."

For its part, ChevronTexaco points out that the Ecuadorian laws did not exist while they were operating in the country, and thus they hold that they cannot be held accountable retroactively. The company compares some of its data to standards set by the World Health Organization (WHO), a United Nations (UN) agency, according to ChevronTexaco spokesperson Jeff Moore. However, Mr. Moore did not cite the specific WHO standards by which ChevronTexaco deems the sites safe, nor did he cite the threshold limits of these standards beyond which the sites would be deemed a hazard to the environment or human health.

ChevronTexaco's argument against retroactivity may not hold, as Ecuador modeled its 1999 Ley de Gestion Ambiental on US Superfund law, which calls for retroactive liability.

"The pollution ChevronTexaco created from 1964 to 1992 is still there now, so current standards are being applied by the court," Mr. Donziger explained. "Our case is like a Superfund case in that we simply have to prove they contaminated and it causes harm either to the environment or to people--we don't have to prove any individual has been hurt (which is unprovable), but that what's out there increases the risk that people will be harmed."

"Win, lose, or draw on the litigation, there are some very serious issues about this company's management that come out of all this," said Ms. Lowe of ICCR. "If they are this combative about public health risks, how well are they managing risks in their operations?"

Later that day, as it turns out, the delegation unearthed other information on ChevronTexaco's remediation and indemnification agreement with the Ecuadorian government that not only potentially impacts the case but also may reverberate even deeper.

Part one of this multi-part article contextualizes the shareholder delegation fact-finding mission on the lawsuit and the impact of oil operations in Ecuador.

Part three examines implications of the Ecuadorian Attorney General's opinion of the Constitutional invality of the remediation agreement.